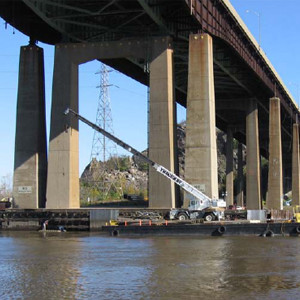 In 2011-2012, Hydro-Marine Construction Co., Inc. was awarded the project for the rehabilitation of the timber fender system at the Hackensack River Bridge in Hudson County, New Jersey. Prior to any work or construction being performed, a survey of the partially collapsed portion at the south end of the fender was performed using a MS1000 scanning sonar. The imaging was used to determine exact locations of extensive debris and if it would hinder new component installation.

The fender system located at the main channel’s two piers was to be partially demolished, including: existing vertical timber sheeting, walers, catwalks, and dolphins. The partially collapsed fender area was rebuilt and new timber and fiberglass reinforced plastic timber sheets and walers were installed in other locations. New catwalks and dolphins were also installed at both piers. Both demolition of existing components and new construction were done both above and below water. All work was done from a work barge including driving piles and crane work. All pertinent safety precautions were met during the entire project. All work was completed by April 2012.