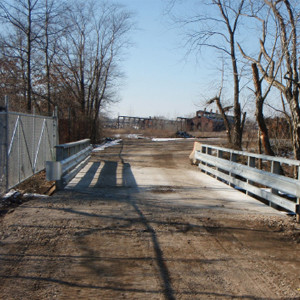 Part of an EPA Superfund site, the abandoned railroad bridge at the Roebling Steel Plant over Crafts Creek was to be rehabilitated to allow construction vehicles up to 110,000 lbs. to access the superfund site’s northern portion. In 2008, The Castle Group was retained to provide design/build services for railroad bridge reconstruction into a roadway bridge. Upon inspection and analysis, W.J. Castle determined the structure’s majority would remain with some modifications and repairs. The existing beams were cleaned and reinforced using steel bent plates bolted to both sides at each end. Existing bearing plates were replaced to accommodate new spacing of steel beams. New stringers, diaphragms, deck pans, and edge plates were installed as well as a new steel guiderail and posts. The composite reinforced concrete bridge deck was built utilizing angle sections attached to main steel beams in lieu of traditional shear studs.

Hydro-Marine performed every project construction aspect including all repairs, removal of the existing components, and installation of new bridge sections. Removal of the existing structure began in November 2008.  The deck was poured the first week of January 2009, and the bridge was open to traffic by January 23, 2009.